Located in the Gulf of California, the Cabo Pulmo National Park and its coral reefs provide an important habitat for breeding, nursing and foraging for ​​hundreds of marine species. Early in its history, Cabo Pulmo was known for its production of pearls, sharks, turtles and many species of fish. Over time this great abundance of marine life declined and many fishermen moved away to find work in the city leaving behind, their precious life in the sea.

Pearl diving dates back to the first Californians who used oysters as a source of food and gemstones (1). In the late nineteenth century and during the first three decades of the twentieth century, pearls were one of the primary economic resources of the region. 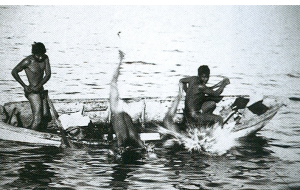 But by the late 1930s, the pearling industry had collapsed (2).  Some researchers blame a worldwide natural mortality of pearl oysters (3), while others attribute it to commercial over-exploitation (4).

Fishermen in the region recall intensive commercial harvests of sharks, turtles and finfish, between 1930-1980. (5) Some fifty-four species of sharks and rays were targeted in the Gulf of California (6). Sharks were targeted in the 1940s as their livers commanded a high price by the military because they provided a ready source of Vitamin A for the troops. Later, around 1970, their commercial value changed as demand for shark fins rose in the Asian market (7) and the meat found an outlet, due to local consumption. (8) By the 1990s, the population of sharks had declined considerably. 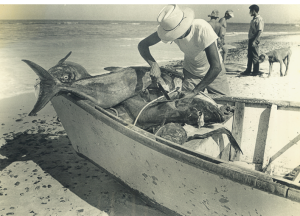 Before 1950, sea turtles were caught primarily for human consumption (11). In the old days fishermen in Cabo Pulmo would paddle out in small boats to net turtles for their meat. Subsequently, the commercial value of the turtle increased because their skin.  Between 1950-1970s, the fishing fleet increased, including large ships carrying equipment with greater capabilities. Excessive exploitation of turtles led to a sharp decline in their populations. Consequently, mountainous stacks of shells accumulated on the beaches. The locals also would collect the eggs from turtle nests on land and sell their shells and leather (12).   The leatherback turtle was the only species that was not considered of commercial importance, however, like other species, eggs from their nests were also looted for human consumption (13).

Some fishermen recall that finfish were still plentiful in the mid-twentieth century. Several species of the grouper family were considered important, such as the leopard grouper or cabrilla (Mycteroperca leopardus), Gulf grouper or garropa (Mycteroperca jordani) and even Pacific goliath grouper (Epinephelus quinquefasciatus), for which there are currently no scientific sightings in the park or adjacent areas (14). 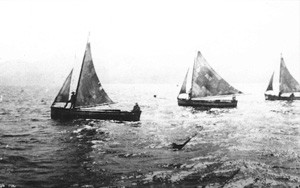 By the 1980s, fishing was already difficult in the region as fishermen needed to go farther and farther out to sea and had to invest more time and resources in their efforts while experiencing diminished returns. When visitors and scientists began arriving to visit or work in Cabo Pulmo some of the fishermen subsidized their income by working as boatmen. Scientists from the University Autonoma de Baja California Sur (UABCS) who were studying Cabo Pulmo’s Reefs began encouraging the fishermen to protect their reefs, encouraging them to form their own tourism businesses (15).

The transition from fishermen to ecotourism was difficult. Fishing is a way of life and is not just about a paycheck. Heated discussions took place among the fishermen of the region who were engaged in the decision whether to protect the reefs or continue fishing. Ultimately, they collectively agreed to protect the reefs, and together with scientists, approached the Federal Government to establish a preserve. Their efforts were rewarded in the decree of 1995 that created the National Marine Park, later to become the Cabo Pulmo National Park that encompasses ​​7,111 hectares of ocean and beach (16).

When the Park was first formed, the agreement was that local people depending on reef life to feed their families, should be allowed to fish for subsistence in certain areas (20kg per family) (17). Over several years the fishermen gradually stopped fishing the reefs, and completely ceased by 2008.  For the first ten years, the reefs were protected by the local people, until 2004 when full-time employees of the National Park direction (CONANP) took on that responsibility in 2004.

In this way this small community of 120 people changed their livelihood from fishing to tourism.

Efforts to preserve the park have not been easy for Cabo Pulmo and its neighboring communities. In recent years, all parties involved in the decision, including the Park, government, researchers, service providers and non-profit organisations, work together to implement a management program. Despite the varied interests, they collectively reached agreements about how to regulate tourism in the area and continue preserving the area (18). 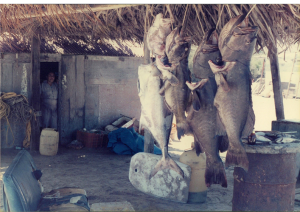 For many years Cabo Pulmo National Park has been threatened by several large-scale development plans for a Cabo San Lucas-style resort (19). On each occasion the plans have been strongly rejected by the local community despite the inducements and financial incentives offered by the developers. The community has instead chosen a sustainable model that promises to benefit their families and communities over the long term (20).

Ten years after the park was established, UNESCO designated Cabo Pulmo National Park as a Natural Heritage site and in 2008 Ramsar’s Convention for the conservation of wetlands added the National Park to its list. Recognition of the intrinsic values of Cabo Pulmo’s National Park by such well-respected organizations, endorse the stance of the local community.

In addition, many non-profit organizations have supported conservation efforts in the Park. Some, have engaged in monitoring the Park’s biodiversity. For example, since 2012 the Pelagios-Kakunjá organization has been conducting research within the park on sharks and has reported 12 species to date. The most common are blacktip sharks (Carcharhinus limbatus), bull shark (Carcharhinus leucas) and lemon sharks (Negaprion brevirostris). tiger shark (Galeocerdo cuvier), white tip reef shark (Triaenodon obesus) and whale shark (Rhincodon typus). Occasionally, three other species are sighted.  After many decades of over-exploitation and scarcity, sharks began to return to Cabo Pulmo’s Reefs around 2005 (21).

Together with the National Park personnel, the community has established a policing program for turtle conservation (22). Today five species of sea turtles have been recorded in the region, with three known to nest in the park.

In addition, community members participate in their own local organizations such as Friends for Conservation of Cabo Pulmo, the Learning Center of Cabo Pulmo and Baja Coastal Institute, in educational, research, community participation in conservation, recycling and cleaning beaches. The community has also created public space where community assemblies meet monthly to share information of common interest and reach agreements on community benefit and conservation.

All conservation efforts-monitoring, data logging and awareness, not only benefit the community of Cabo Pulmo, but also represent a model of cooperation and development, which can serve for other communities and the world.